The Jott service is shutting down May 3.  they were bought by Nuance, the makers of Dragon Dictation software, who does not seem to be replacing it with anything equivalent.  I found a possible replacement: Dial2Do.

George checked and found that coal burger is now open, and they've removed the phony testimonials from their home page.  "I'm happy to see they use grass fed beef, and pictures of the burgers and shakes sure look good:"
George also remembered that he ran across The Queen's Gambit after reading a really good review by Jesse Kornbluth of The Art of Racing in the Rain.  "I was looking at some of his other reviews and after reading his review of The Queen's Gambit ("Rocky for smart people") decided I had to give it a try:"
Here's the rock climbing deal George mentioned:
And here's the juggling quadrocopter video:
Here's the link again for the Kenji hamburger video, and the link for his french fry article (probably too long to read, but definitely worth a scan through the photos):
George's sister sent the following photo showing the line outside The Shake Shack: 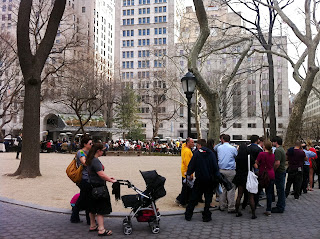